Reunions, a plan to help Pakistan and cached media.

This month, we have a nice and compact newsletter for you; even the ominous TOC was sent home to take a break. Topics this week are: disaster relief, a lot of tech updates, the possible Versum/Teia swap integration, news on the path to a fully registered Teia DAO, and an exciting Community event.

Versum.xyz will soon be indexing and showing OBJKT tokens, meaning Tokens minted on Hic Et Nunc/Teia/hic.af will appear on Versum and users will be able to swap/list these on Versums own marketplace contract. Fees from trades through the Versum marketplace contract will then go towards Versum.

The “swap” refers to the action of listing a Token on a marketplace contract, and the Price attached to it.

Versums Team approached Teia with the idea of supporting each others swaps, like Teia already does with Objkt.com: On Teia, users would be able to see and collect from all current marketplace swaps (mentioned above) and swaps done on teia would be visible on teia, versum and objktcom, which would bring more utility and visibility to teias swaps and OBJKT tokens. On the other hand it would give Versums OBJKT swaps the same utility/visibility as Teia swaps.

For more info on the topic of swap integration, read this Article about web3 funding and the economics of marketplace fees

Note: This is only about indexing listing prices/swaps of OBJKT Tokens (OBJKT tokens are NFTs minted on the hicetnunc smart contracts/collection. For example minted on Teia, Hic Et Nunc, Hic.af, hicetnunc.miami). This vote is NOT about Teia showing ITEM tokens minted on Versum.

The Vote on this will be set up in the next days and announced as a banner on teia.art

Rodell Warner initiated another Tezos art event in honor of the good old HEN days: The idea is to revisit the days of hicetnunc, when everyone was using the HEN contracts and trading OBJKTs for OBJKTs: It’s all about art and sharing! Mint your pieces on Teia and either swap them for (almost) 0 tez or use the hic et dono tool to limit your giveaways to 1 edition per wallet 8editions can only be claimed on the dono page currently)

there is an (almost nostalgic) Event page powered by NFTBiker 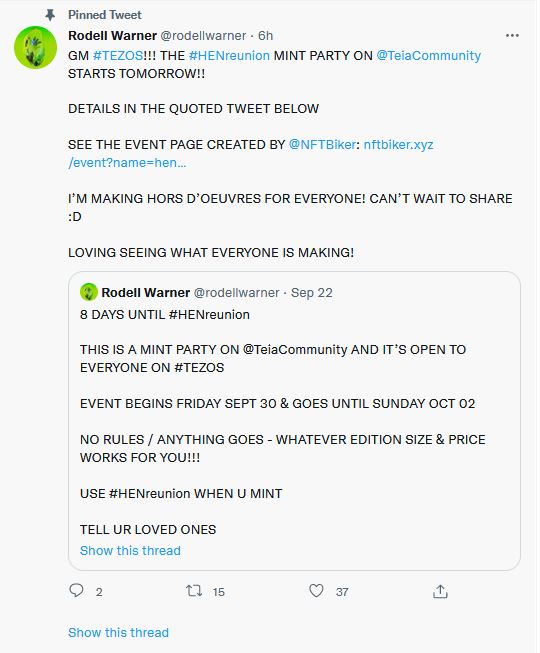 In late August, a torrential monsoon triggered the biggest climate related disaster in history: A third of Pakistans landmass is submerged in water affecting tens of millions of people, destroying crops and washing away houses, hospitals, and schools. To date, more than 1,500 people have lost their lives to the floods, including 552 children. Currently, 73% of the flood victims have inadequate access to necessities like food, water, and medical aid.

Now that the water is slowly receding, the full damage is being revealed: Not only did the catastrophe displace about 50 million people and destroy essential infrastructure and crops, it also kicked off a health crisis in Pakistan. UNICEF confirmed 588 malaria cases with another 10,604 suspected cases, in addition to the 17,977 cases of diarrhoea and 20,064 skin disease cases reported on the 15th of September. 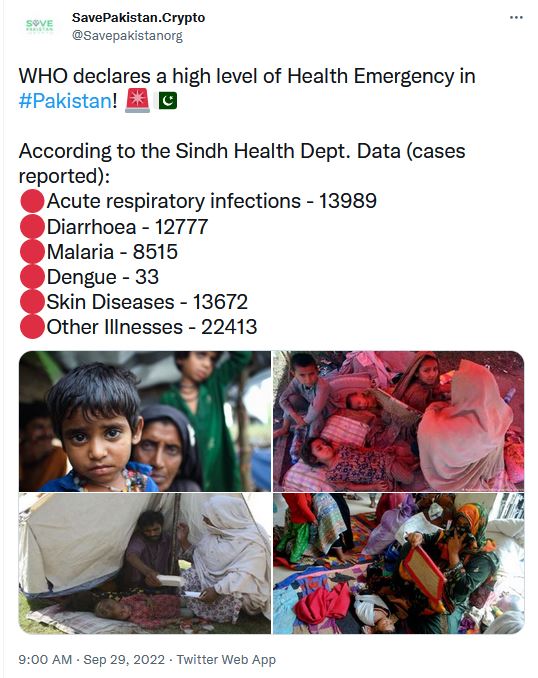 The new Teia Charity team has been looking into ways to set up a fundraiser event, which has been made more complicated by the strict cryptolaws in Pakistan. However, we found and partnered up with SavePakistanCrypto who set up a Tezos wallet for this to disseminate donations via Tayaba.Org to various local partners and initiatives.

An Interview with Representatives from both Orgs as well as all the info about the fundraiser itself is up on our blog.

As always with charity work, transparency is key. We document all the details about the management of the donation contract as well as a list of organisations and reports about the impact on our wiki article for the fundraiser on the SavePakistan Wiki Article

The donation address for this fundraiser initiative is KT1Jpf2TAcZS7QfBraQMBeCxjFhH6kAdDL4z

It is a smartcontract controlled by representatives from Teia, Versum, Objktcom and FxHash. This setup allows us to gather donations and distribute them colectively. It also allows the signers to later add more wallets to distribute funds to, should we find more trustworthy orgs that accept tezos donations.

Starting now, use this address to set up split contracts/swaps on any tezos marketplace (i.e. Teia, Versum, FxHash, ObjktCom) or donate tezos or oXTZ directly to the address. (Please don't send NFTs to this address). Here is a step-by-step guide on how to set up the collab contract

#savepakistan is the event hashtag for tweets and mints of fundraiser pieces. Please also help spread the work, ie by sharing the twitter thread for the event

The main phase of the funraiser will start after the #henreunion event has ended on oct 2nd.

Raising awareness for Pakistans situation will be key for this initiative; Let's use the event hashtag #savepakistan for minting fundraiser pieces and for twitter posts that relate to the event to concentrate attention on the fundraiser.

Teia has a dedicated feed on the main page for pieces that have a split of at least 50% of the revenue towards the donation address. 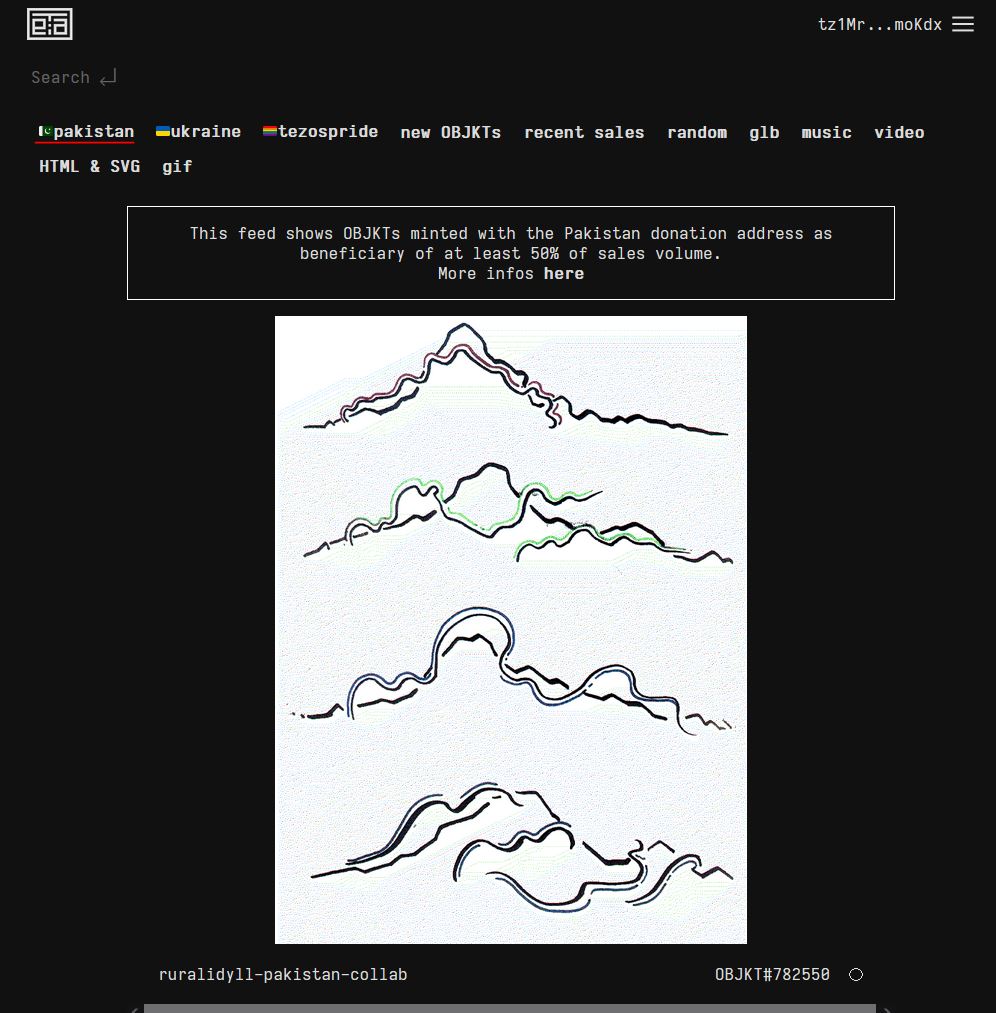 There is an event page on Teztok/Teia.rocks that shows a live feed of all pieces minted with the hastag #savepakistan across all tezos marketplaces.

Teia is currently looking for people to add to the Charity Team. If you want to help with organizing this initiative and further promoting it, please head over to discord and jump into the #general-culture-equity channel and say hello.

From the Tech Department

Have you noticed that Teia is already a lot faster since a few weeks? This is due to the NFT.storage gateway we switched to, it provides faster loading speeds and a more stable minting process. Devs are still working on a few quirks the switch has caused but in general we get a lot of good feedback about better media loading times on Teia. Soon we will use thumbnails that will pre-cache media so it can be loaded much faster on the marketplace! Thanks to a new setup initiated by the Tezos foundation.

There is a lot of exciting new things almost ready: Thumbnails for social media sharing, dono giveaway integration on the marketplace, UI improvements.

On the little teia.art sister site teia.rocks, Zir0h has already activated a new feature for Teia: thumbnails for link sharing. Test it by posting your objkt link from teia.rocks via discord/twitter: It will show a thumbnail of your piece. (This feature is coming soon to Teia.art — after refactoring the old HEN code.)

News from the Registration Odyssey

We kicked off the registration process officially by signing the contract with MiDAO and starting to collect the needed KYC info as well as working on the Operating Agreement of Teia DAO. The process is expected to take about a month, after which we will be able to activate the marketplace fees and Teia will officially be a non-profit organisation. 🎊

Soon after we are incorporated, we will start setting up the token distribution for the Teia DAO.

Julio Glatt (who had a big part in the original hicetnunc logo) has shared a few logo ideas for Teia that we could potentially use for mixed-use branding purposes while keeping the rotating logos going on the site.

These symbols are designed so it can be used as a background logo, a static/recognizable symbol for offline events and printed media. So these are all symbols that were designed with the intention of being a screen/a space for the rotational logos to be, while it represents Teia as a symbol.